Alchemy is a newly opened microbrewery in town, located on the residency road and part of the five star property, The Chancery Pavilion. It joins the league of those unique breweries that are a part of a hotel. It serves six amazing craft beers, classis as well signature ones, my favourite being the Guava gose.
Alchemy indeed turns any experience gold, with signature cocktails and fusion food, I think everything I tried at this place was unique and never seen or tried before, thanks to the great international fusion touch rendered by chef Suresh.

AMBIENCE
Located on the terrace of the chancery pavilion, this is a very elegant and beautiful property. With three seating areas, the middle one has beautiful crafty lamps with bar seating. The open air seating oversees the city scape and ensures the wind doesn’t blow us off , thanks to the windscreens. It has round table seating and the brewery complex opposite. The machinery is all brand new and it’s a very maintained brewery I came across. 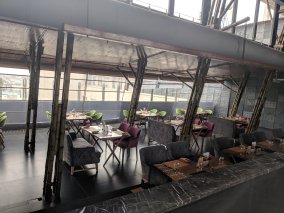 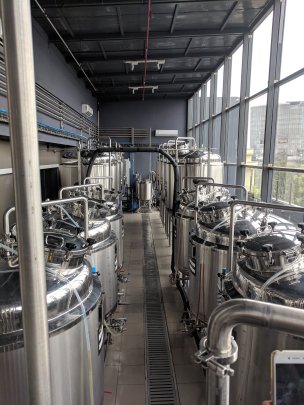 The covered seating area has more rectangular table seating, which oversees their pool side area. It’s covered with wooden ceiling and couch based as well as cushion base chair seating is present. I found the seating extremely comfy and the aura of the place very soothing.
The bar counter is open, clean and lengthy. 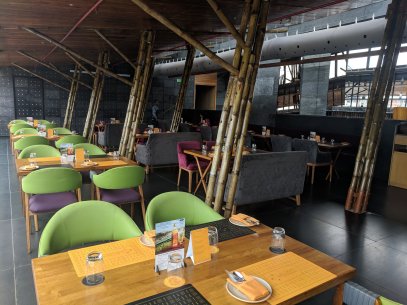 FOOD and DRINKS
Their signature cocktails had a very indian touch and the craft beers are worth visiting this place again and again for.

°In house Brew°
°Guava Gose°
This traditional German style sour wheat beer was my favourite, never tried and heard of before. It had the interesting tinge of Kala namak and zested lime over the base of pink guavas. The flavor of guava was well rendered and abv-5% and ibu-8 were the salient figures.

°Jaggerye°
Another unique presentation from their brew, the sweet jaggery smell could be well sensed in a deep inhale. The flavors were mild and abv-6% and ibu-48 were the salient figures.

°Pilsner°
I don’t really admire pilsner but this one was prepared so well, I had the whole taster and another glass full of it. The Color was regular light but no compromise on quality and taste. The aging was done well and decent foam was available.
Abv-4.5% and ibu-20.

°Witbier°
A regular wheat beer with an irregular citrusy touch. This had orange essence in flavor and aroma, creamy and with a blend of coriander and pepper touch.
Abv-4.7% and ibu-10

°Pale°
This four hops base brew has a melony and citrusy touch as well. Light coloured but with good bitterness.
Abv-4.8% and ibu-22.

°Stout°
I am am admirer of stout and this was done pretty well, could have had more coffee flavor but I was however satisfied with the aroma itself. Had a creamy texture and decent foam.
Abv-4.8% and ibu-22

°Cocktails°
My favourite and a must try was the Ghazal, thanks to the honey and pineapple touch in dark rum.
The desi touch to LIIT in Long Island Masala chai is worth vouching for. The spiced up drink was well spiked and had the orange and tea base as against regular cola. 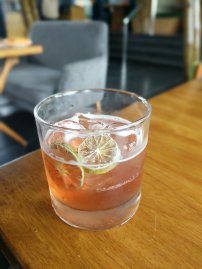 Gingertini was a gin based drink with lime essence and pomegranate juice.
Mojito from the east( indian east), is a classic drink with gondhoraj lemon juice and vodka.

°Artichoke aloo samosa°
With wasabi cream at base, these crispy cones with potato and artichoke filling were my favourite. 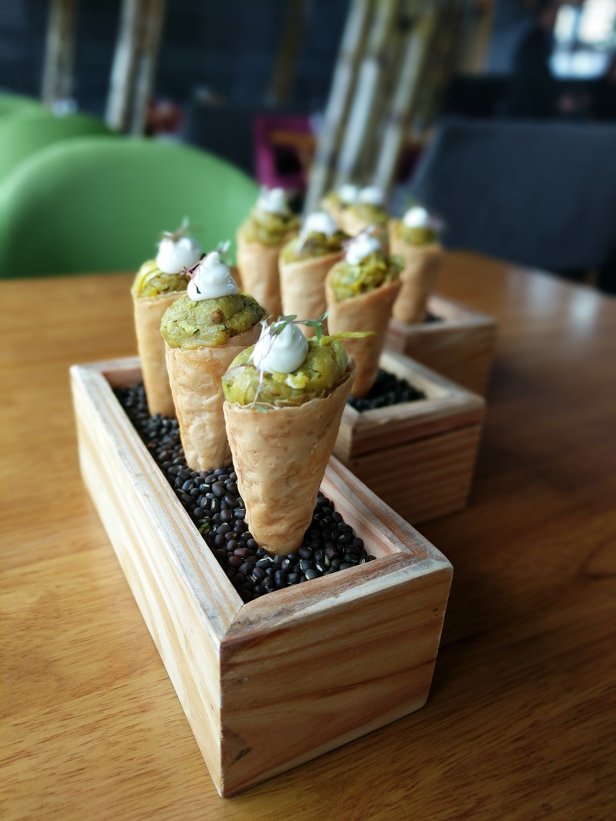 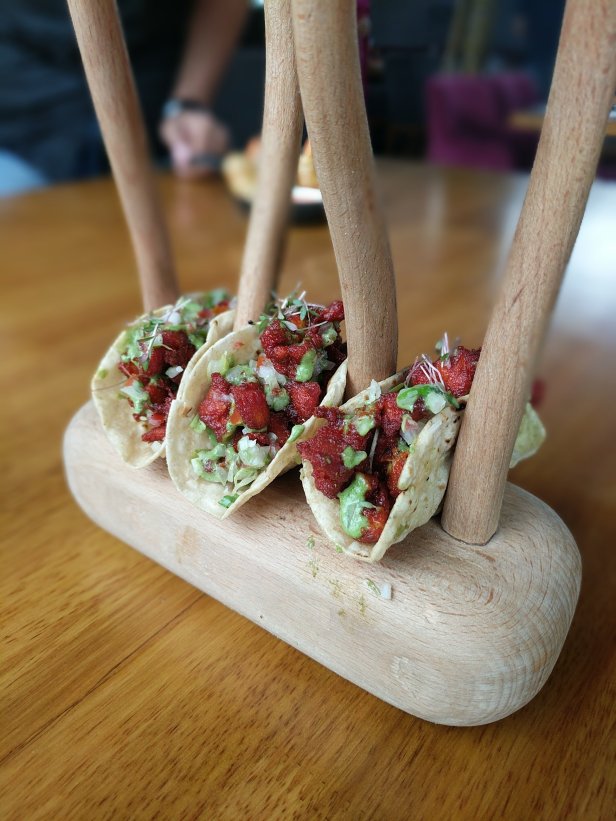 °Saag paneer Spanakopita°
Another samosa variant, this had paneer bhurji, very mild in spices and low in salt, with infusion of spinach and was served with herbed feta dip.

°Five cheese kofta & Siracha chicken naan°
These were green chilli and olive stuffed koftas made in tomato cashew makhni gravy, having mix of five cheese and a very soothing flavor. I personally loved it.
It was complimented with Siracha chicken naan which were basically minced spiced up chicken in Siracha sauce in minute quantity, tandoored well and presented beautifully. I loved it. 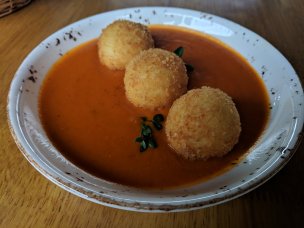 °Spring chicken bharta°
Not exactly the bharta mincing level, but chunks of chicken in a sober yellow gravy with mild spices , topped with sunny side up. It was well complemented with garlic bread. 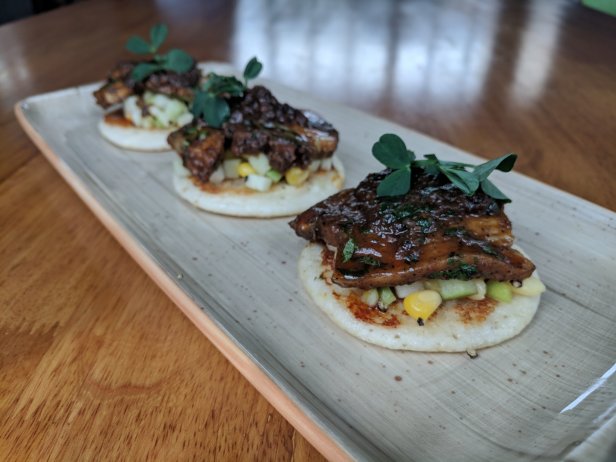 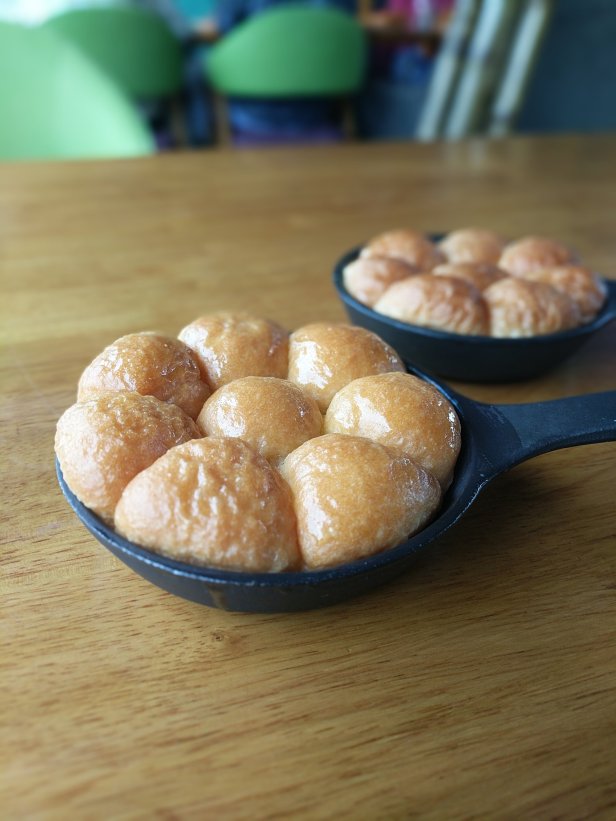 °Twice cooked lamb°
This was basically fried crumbs with inner minced lamb filling and chopped onions, again sober in spices and served over pea based sauce.

°Desserts°
The amazing hazelnut holige was a surprise package.
It was basically a toasted pancake with ghee infused Nutella.
Mysore Pak cheesecake– this south Indian speciality had cheesecake fusion with mascarpone cheese and caramelized corn. Must try 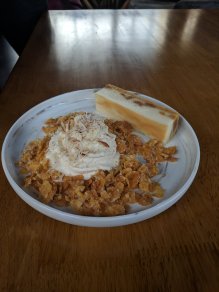 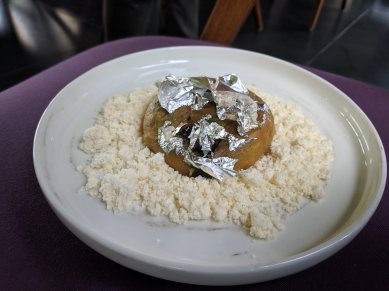 Green mango Mille feuille is the most interesting looking and tasting Mille fuille I came across. The very striking flavor of raw mango makes you reluctant as well as tempted at the same time. 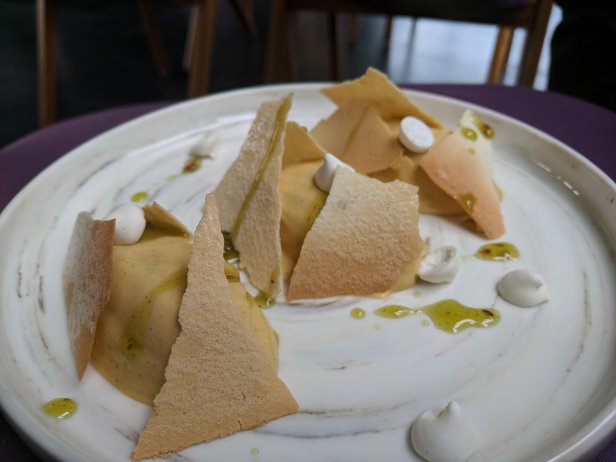 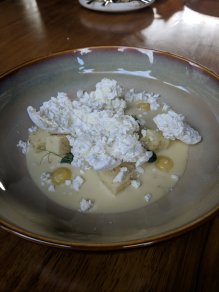 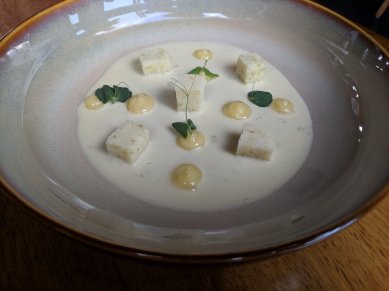